Long Lines – Useful? Worth it?

Some of you may have noticed that whilst I walk dogs, especially new ones that I tend to put them on a long line. I prefer these over extendable leads for the main reason that they don’t hurt as much if the dog takes off and your leg/hand/finger is caught round it.

The long lines give the dog an ability to have freedom without the chance to run off! This allows both your dog and I to get to know each other and do some recall training before I let them off. It means I know your dog will come back when I let it off lead! Obviously I don’t want to loose your dog, and you don’t want to either!

Another good reason I am using long lines at the moment is because of the wildlife around. Spring is the prime time of year for birds to be nesting on the ground. Having dogs on a line means that the hunting dogs can have freedom without the risk of them upsetting birds and chasing them from their nests! This is important especially in areas where it mentions nesting birds because we like our open spaces to run our dogs and we don’t want to loose them! Unfortunately society is becoming rather anti-dog and though we are lucky here to have lots of dog friendly walks and cafes we don’t want to risk loosing them!

You can get a variety of lines, different lengths, different types. Various companies will also make them to the length you want, some put bungee in them. So I will give you a quick run down on long lines.. 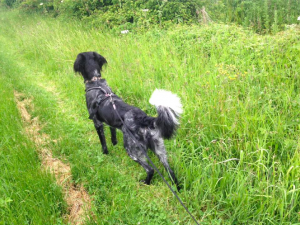 These lines can be picked up in many stores they are usually made of a type of webbing that a lot of leads are made from. They are pretty cheap and you can usually get them in 5, 10 and 15m lengths.

They do the job pretty well, in fact ours is well used and has been thoroughly abused and is still perfectly usable! The ones in the shop are usually black, so if you aren’t bothered about colour then they will suit you fine.

There are a few negatives though, which until recently we just had to put up with! The material they are made from soaks up water, which means if you need to collect the line up and the dog has dragged it through water or wet grass, the line can get quite heavy and it becomes soaked! There is also an issue if the line goes through brambles or any plants that have some form of thorns, or those really annoying seed burrs because everything gets caught up on the line! So as you can tell – these lines do their job and do so very well! However there are downsides that up until recently we have just got on a dealt with because the only alternative was mostly in America and turned out to be rather expensive to get shipped over! 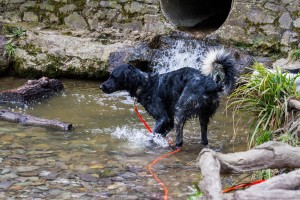 Biothane Lines are a long line made of a plastic type of material. They are being made in this country by a large number of suppliers but we personally would recommend Rock It Dog Design, owned by a friend and we rate the quality of their work! (ours have their collars and lines!)

So whats so good about biothane lines? Well, everything negative about the webbing lines, they are not issues here. The line because its a plastic type of material it doesn’t get caught up on anything. No thorns get stuck in it! It also does not suck up water! However, it does become rather slippy when wet but it dries so quickly even in the rain that it hasn’t been a problem! The best thing is because its doesn’t get tangled in anything there is less risk of a dog having issues when swimming with a line on compared to the webbing one.

As you can probably guess, I love the biothane lines! I have had dogs swim with them on, go through mud, sand, brambles without a problem. Yeah it does collect a small amount of mud, it won’t stay squeaky clean but it cleans so easily that its not really a problem!

We use the lines a lot not just for work but at home as well. Our Large Munsterlander is an avid hunter and so getting him to listen and recall well has been hard work! We have had him on long lines for a long time, getting him used to listening and I can say that it has finally started to pay off! They are a handy bit of kit that is valuable, whether you have a puppy that is learning to come back to you or an older dog that doesn’t always listen or might be deaf and can’t hear. It gives them freedom without you worrying about loosing them/them wandering off.

I feel I should let you guys know, that I was skeptical of using long lines, found them a proper pain to get used to. However having had them for a few years now we find them to be a very important tool in our tool kit!